Eurpoe Has Settled in at Lucinda's

There are many, many things we have incorporated in Lucinda's that we discovered during our trips to Europe over the years. Today I want to give you a few samples of those.

When you have your morning coffee we ask you to pick a coffee mug off the wall. They are located on either side of the blackboard,with the morning's breakfast fare listed, and in the corner above the plant. All the mug places we have visited, except the one from Hawaii. That was given to us by a couple who live in Hawaii and visit us frequently. They gave it to us on their last visit because they never saw a Hawaii mug on our wall. That is because we haven't been there yet. 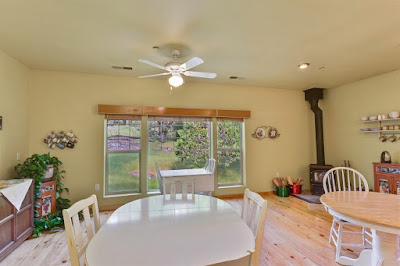 Notice the plant stand in the left with the mugs above it.

I mentioned Daryl's new talent of folding napkins before. I have not explained that his new talent is used daily at breakfast with a new fold every morning. On the Emerald Star, our river cruise ship, they did not duplicate the folds of their napkins either. Before we left the ship the Dining Room Captain gave Daryl their sheets on how to fold napkins. Daryl can now make endless varieties by following those directions.

We use lots of tablecloths and other linens at Lucinda's. The vast majority of them we got in Europe.  On our Rhine River cruise we got some special linens in Rudesheim at the Kathe Wohlfahrt Christmas store. Not only does the store have Christmas every day, but they have some of the finest linens. We have also purchased linens in Prague, Czech Republic; Milan, Italy; Bath, England; and Dublin, Ireland.

One special thing I did while on the Rhine River cruise vacation was a cooking class at the Marriott in Venice, Italy.  At the cooking class the students were taught an easy substitute for Tiramisu, using Amaretti Cookies. The recipe is very easy and it is so yummy!!  I've used it for some of the dinners we do.

We used the MS Emerald Star "Culinary Cruising - Delicious Dishes from the Capetian's Table" for several recipes. One I really like and we used for one of our Farm2Fork Dinners for a group was their "Lamb Stew with Roja and Peppers on Saffron Rice"; with a couple small modifications. We used baked peppers as a cup for the stew served with a potato stack ("Potatoes Au Gratin" - we called it a stack because it is presented that way.) instead of Saffron Rice. We used their "Molten Chocolate Cake with Balsamic Cherries and Bourbon Vanilla Ice Cream" as the idea for our Chocolate Cake with Ganache and Balsamic Cherries.. 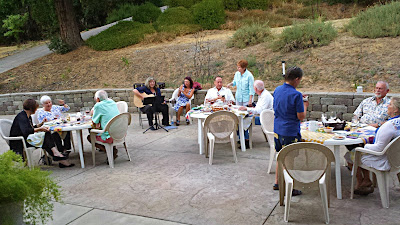 Speaking of Europe and Germany specifically, Daryl and I treated our daughter, Shanin, her hubby, Johnny, and our granddaughter, Hailey, to a Christmas trip to Germany to visit our German family. Our grandson and his mother live an hour north of Frankfurt, in a speck of a town named Ballersbach. It's not even on the map of Germany we used for planning our trip. 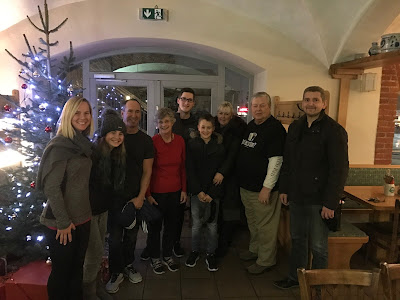 From L to R: Shanin, Hailey Johnny, Me, Justin (Beate's grandson), Daryl and Kai-uwe.
Back row: Steven and Beate, at the Hotel Gutshof Restaurant.

We spent several days in the Ballersbach area, and visited several spots our daughter visited 30 years ago on her two trips. Our son, Sean, lived in Germany for many years before his son, Steven, was born in 1994. Beate, Sean's ex-wife and the namesake for our Beate Suite, and her side of the family have become very good friends.  We "had to" visit Beate's nephew's auto shop, where he transforms old cars into Hot Rods. Mario has been here many times over the years buying car parts and cars. 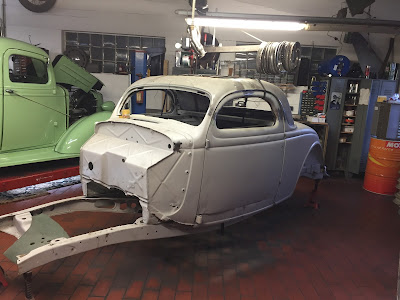 Roadside Hot Rods shop where Mario does his magic to vehicles.
From there we went to Heidelberg for New Year's Eve and eight hours of fireworks around the city. From Heidelberg, we went to the town of Bamburg with the old town hall built in the middle of the river. Then it was on to Wurzburg where we toured the Residence with its opulent ceiling painting and private rooms' decor.  Rothenberg, a walled city, is where I bought the latest Kathe Wohlfahrt linens. From Rothenberg, our kids went to Paris as a surprise for Hailey. She has wanted to go to Paris from the time she was about 5; now she's almost 13. Shanin and Johnny managed to keep their destination a secret: Hailey only realized they were in the Paris when they arrived at the train station. As most of you probably know, trains in Europe show the final destination of the trip in each car.  Hailey saw that and thought they were on  the wrong train, but her Mom & Dad assured here the sign was wrong.  A great surprise. We couldn't have given them better Christmas presents. Time with us and Germany, finished with Paris. WOW !! 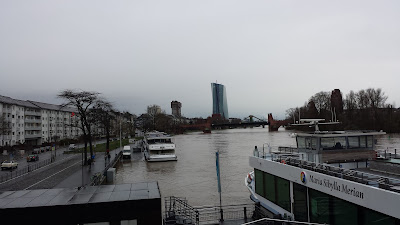 Daryl took this from the pedestrian bridge that crosses the Main River in Frankfurt.

After dropping the kids at the train station, Daryl and I went to Frankfurt for our last two days in Germany. We have been there several times beyond the airport, but never really visited the city. We did a city bus tour that took us around parts of the city we have never seen.  We've been to the Alstadt before, but we had never ventured to the river. A great way to wind up our trip.

It was a great Christmas.