About Our 50th Anniversary & Trip

A part of the April 2016 trip was obviously our 50th anniversary.

The dominate feature of the truly first class places was their quality. Quality of their products, services and amenities. Bed linen was the most obvious and foremost on our research list. 1,200 thread count sheets were nowhere to be found, even at the JW Marriott in Venice, Italy (where we spent our anniversary night). Their linen was nowhere comparable in comfort to the Micro-fiber sheets we use on all our beds. Micro-fiber fabric is used everywhere in Europe as part of there cleaning chores. That fabric is soft for using to cleaning precious surfaces and itself is easily cleaned for reuse. That is why we use the micro-fiber in all our towels and robes. It is soft for those precious surfaces known as our guests and yes it is also Eco-friendly as it is easy to clean and dries twice as fast as Turkish towels or Terry robes. On that point we are first class and have been for many, many years. 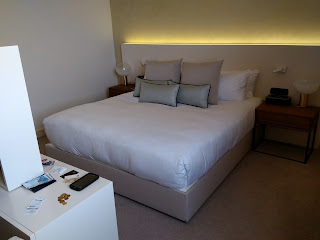 The king-size bed in our junior suite at the JW Marriott in Venice, Italy

While on the Emerald Star cruising up the Rhine River from Amsterdam, Netherlands to Basel, Switzerland, we enjoyed top notch, first class service from all levels of the crew responsible for pampering us. Of course we paid through the proverbial nose for those services.  They provided every request we had: another beverage, something different than what is being served at meal time, please come back later to clean our suite and what is in the villages along the river.  The little things like name plates for dishes being served that are not obvious as to what they are made the cruise more comfortable.  We picked up lots of tips and ideas from the cruise from recipes (received an autographed copy of the Emerald Waterways cookbook), and learned many ways to fold napkins, and numerous other ideas. 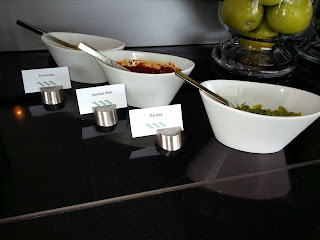 Here at Lucinda's we have prided ourselves on doing the extra little things that make your stay more comfortable for you. Not everyone wants coffee only at 9:00 at the breakfast table. We have the Kreuig coffeemakers in the suites if you want coffee at 5:30, as our guests want as I write this. We don't have staff like the Emerald Star or JW Marriott, but Daryl and I have been doing a first class job of giving you the best service. 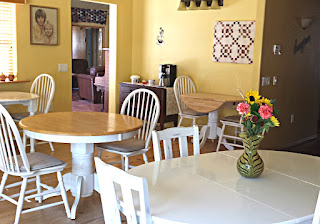 In the far corner at the doorway is the coffeemaker where coffee can be made anytime.

I mentioned earlier that we discovered new ways to fold napkins. The way we have been placing the napkins on the tables is one of those styles, but neither I nor Daryl knew those folded napkins we have done for 12 years was a special fold for first class dining. Daryl has mastered several different styles that he now uses for the first class breakfast table and the occasional dinners. 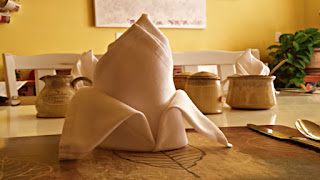 Daryl has named this style of the folded napkin "The Flower".

On a personal note: 50 years ago we stopped at a jewelry store in Reno on our way to Twin Falls, Idaho to buy our wedding bands. After we were home about two months after our wedding vows Daryl and my brother, Roy, were playing basketball at my parent's house. Daryl made a left handed hook shot and the ring flew off his finger, never to be found. Last March, on one of our visits to our rental property in Reno, I made a secret visit to that same jewelry store to buy another band. I knew it wouldn't fit, but I wanted it to give Daryl on our 50th anniversary. We returned to the store after we got home and had the ring resized. 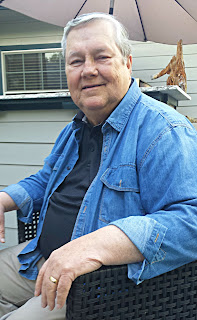 The wedding band I gave Daryl at the JW Marriott in Venice, Italy.

Lucinda
Posted by Unknown at 4:31 PM